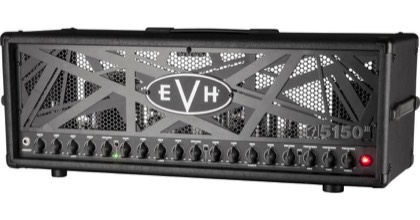 John has a particular fondness for Gibson Les Pauls, and for most of his career he has used the same black Les Paul Custom. During the Thin Lizzy days, at Phil Lynott's suggestion, John changed the pickup mounting rings, pick guard and toggle switch plate from the stock Gibson parts to pieces made of chrome, giving the guitar its unique look.

John's main guitar is a 1978 model Gibson Les Paul Custom and it has been used for thousands of shows and on every recording John has made for the last 20 years. There are some serious signs of wear and tear. As you can see in the photo above, much of the finish has worn off the back of the guitar, and the neck has some worn spots, too. But all things considered, it's holding up well. The photos above are about 12 years old and the guitar has another decade worth of tours on it now and shows considerable more wear.

John has replaced the stock Gibson tuners with Grover tuners. The guitar also has a brass nut. There was a Gibson "Dirty Fingers" pickup in the bridge position for many years but that pickup started malfunctioning after all the years of wear. It was replaced with a lower output Gibson PAF re-issue pickup a few years ago. The guitar has been re-fretted several times. The current fret wire is a medium jumbo size and has a very different feel from the "Fretless Wonder" style frets Les Paul Customs often have. John likes the action on his guitars pretty low and he really likes the slick feel of the ebony fingerboards on Les Paul Customs.
Below is John's1959 Les Paul Sunburst. This Les Paul is pictured on the cover of the "Loveland" CD. It was also used for most of that recording. For those who are interested in Les Pauls, it doesn't get much better than this guitar! This model and year of guitar is about the most collectible guitar there is and this is a fine example. It doesn't have the most extremely figured maple top but it plays and sounds fantastic. John used this guitar for several shows a few years ago. However, he started wondering about the sense of subjecting a guitar of such value to the rigors of the road and switched back to his main black Les Paul Custom.

Below is John's 1961 Fender Stratocaster. John often uses this guitar for recording clean guitar sounds. For example, he used it for the much of the Whitesnake recording of 'Is This Love'.

John has acquired some new guitars over the last year or two and we'll get some pictures of them up soon. Out of the new additions, this one is his favourite--an EVH Frankenstein.

Another new addition is this Joe Satriani Model Ibanez. What makes this special is that it was given to John by Joe after Joe had used it for a tour.